For the past 17 years, Punk Rock Bowling has been a destination festival for Las Vegas, Nevada.  And this year, organizers expanded to Denver, Colorado and Asbury Park, New Jersey. 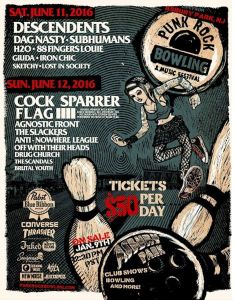 Asbury Park was a perfect fit for this festival.  Taking place June 10-12th, the lineup featured mostly established acts like H20, Dag Nasty (with original singer Shawn Brown), Agnostic Front, Anti-Nowhere League, The Slackers, and FLAG (a Black Flag “tribute”), with headliners Descendents and Cocksparrer. On Friday and Saturday night, there were two club shows at both The Wonder Bar and The Stone Pony, respectively.
Here are some of the highlights:

As expected, Descendents were one of the highlights of the weekend. They closed out Saturday night with an extremely energetic and crowd-friendly set. This highly influential band has not released an album since 2004 and they have not missed a beat in the meantime.

Descendents opened the set by recognizing there would be new songs but quickly transitioned into the classic “Everything Sux.” The music and vocals were extremely tight and played a variety of classics “Myage” “I’m the One,” “Silly Girl,” “Pervert,” “Clean Sheets,” and “Loser.”

Throughout the set, there was a tone of positivity and joyous celebration in the crowd. The entire audience sang each word and raised their hands in gratitude. The band previewed some new tracks from the forthcoming album Hypercaffium Spazzinate, as well.

Sandwiched between Anti-Nowhere League and Agnostic Front were The Slackers. The Slackers, all in suits, played their unique brand of ska. Though their sound is quite a departure from Anti-Nowhere League, the crowd did not seem to care as they skanked along to a varied set which included an excellent cover of Misfits’ “Attitude.”

Minneosta-based Off With Their Heads! provided a emo-rock tinged set, complete with fist pumps, chorus chanting, and some delightful banter.  After their performance, I asked myself questions on why I had never listened to this band before. 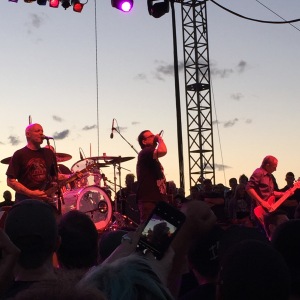 Another highlight was FLAG. FLAG is made up of one-time Black Flag members and is billed as “tribute,” sort of.  Fronted by Keith Morris, they played a ton of popular songs, including “Gimme Gimme Gimme,” “Rise Above,” and “My War”. Des  Candena (who sang with Black Flag during the early 1980s) took the mic for a few tracks as an intense circle pit erupted in the center.
There are few bands that are as dynamic as Night Birds. On Friday night, they played at Stone Pony with John Caspi & the First Gun, The Falcon and The Bronx. Playing for a hometown crowd, Night Bird’s set at Stone Pony was just more evidence of their power as a band. Lead singer Brian Gorsegner knows how to rile up a crowd and keep them wanting more.
The next band up in at this pre-festival club show was The Falcon, featuring Brendan Kelly from Lawrence Arms, Dan Andriano of Alkaline Trio, Todd Mohney of Rise Against, and drummer Neil Henessey. They kept the energy going with a little bit of banter and a bunch of anthem-style rock tunes.
For the Saturday night club show, I saw PEARS and Blanks 77 at Wonder Bar. While I missed most of PEARS set, what I did see was awesome. PEARS conveys much energy on their recorded albums and their live performance was no different.
Classic street-punk band Blanks 77 followed and completely blew every other band out of the water.  Their energy fed perfectly across the crowd of multi-colored mohawks as they played songs like “I Wanna Be a Punk,” “Losing My Brain” and more.
Overall, the festival was well-organized and easy to enjoy.  There were no overlapping sets and each band stuck to their time slot.  Bands knew when to just play the hits and when to shout-out to the crowd.  The extremely reasonable $5 PBR tall boy cans and friendly staff definitely enhanced the experience.  I just hope it will be back next year.
40.220391 -74.012082