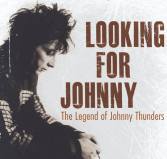 Directed by Danny Garcia (The Rise and Fall of The Clash), Looking For Johnny is a documentary on New York legendary guitar player Johnny Thunders.

There are two kinds of people in this world. There are those who hold up Johnny Thunders as the exemplar of sleazy street punk, raunchy riff-rock, and gutter poetry. Then there are those who don’t know who he is. Looking for Johnny is a film for both. Written and directed by Danny Garcia, Looking for Johnny, a documentary funded via an IndieGoGo page, is an unflinching film about a one-of-a-kind man and musician who is at once the hero and villain of his own story.

It starts with his humble beginnings in Queens and the first major event of his life, his abandonment by his father at a very young age. From there we learn about the young John Genzale’s obsessive, dare I say addictive, personality. His former New York Dolls bandmate Sylvain Sylvain tells the story of giving Johnny his first joint in high school. The next day Johnny came in to school with a pound of weed. It was that same personality that helped him go from a barely capable musician who was kicked out of one his first bands to one of the most distinctive guitarists of his generation. It was also that personality that led him to be a hopeless drug addict.

Sadly, if there’s any arc to the film, it’s Thunders’ long slow grapple with his addiction. We see all the drug-fueled bad decisions and bad behavior that led to the crumbling of his career and his untimely demise in 1991. The film never shies away from the darkness or some of his most embarrassing moments. However, the music always shines through as a beacon at all the right moments. After the acrimonious break up of the New York Dolls we get The Heartbreakers, whose original lineup comes off as the best band you maybe never listened to but totally should. Amidst mountains of personal problems we hear Hurt Me, a startlingly naked acoustic album that reveals his sensitive songwriting to be an equal strength to his primal guitar playing.

In the end, Looking for Johnny is a pretty sad story but it’s most certainly a fitting tribute to one of the most unique and troubled musicians of all time. Fans will love it and people wishing to learn more about Johnny Thunders will get what they’re after. It’s currently doing a tour of promo screenings and festivals and will hopefully get a wider release soon.

View the trailer below